Volunteers, counterparts, and girls on the beach in Kribi.

The 2013 National Girls Forum was the reason for my second trip to the Grand South of the country since I first went to post at the end of November. This time I got to invite both a counterpart and a Cameroonian girl to come with me to the beach town of Kribi for the forum.

The theme for this year’s NGF was keeping girls in school. This is a theme particularly relevant to the Grand North of the country, where girls often don’t start, let alone finish, school. In some more conservative communities, women never even leave the family compound, and need permission from their husbands or fathers if they do. My town is not actually very conservative for the North region, but two of the secondary schools in my community have girls as only about 30% of their enrollment. I have also heard of schools in the North where the enrollment is closer to 15% female.

The forum featured topics like working with parents and communities in a conservative environment, helping girls feel empowered, activities to raise money for school fees, and HIV/AIDS education. It is always a little hit or miss when it comes to the quality of presentations for these things, but some of them where really good, and I am hoping that my counterpart and I can put some of those ideas into practice in the coming school year.

My favorite part of the trip, however, was seeing most of the girls and many of the counterparts who had never seen the ocean before touch it for the first time, some timidly, some shrieking half the time, others with a gusto that had a lot of us Volunteers looking on with worry as they played in the strong waves. On the last night that we were all in Kribi, we built a fire on the beach just across the street from our hotel and danced as we sang (often hastily translated) camp songs at the top of our lungs. 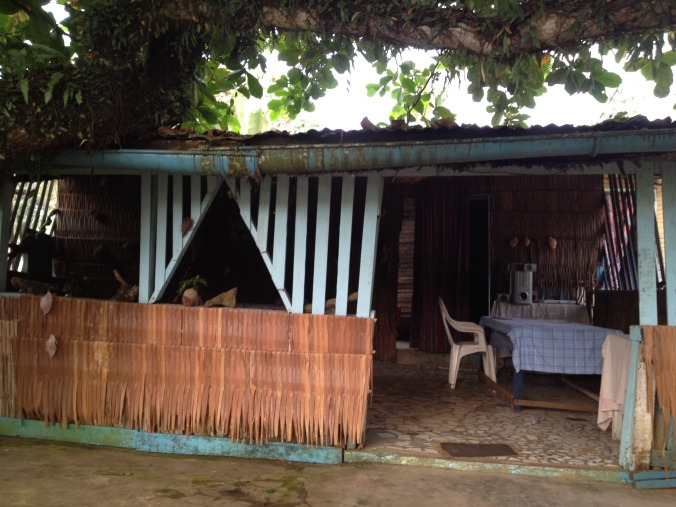 It’s so easy to find good food in Kribi, too – this restaurant was great!

Hangin’ on the beach in Kribi

Just last night I got back after being away from post for 3 weeks, most of which was spent at an in-service training in a town outside of the capital. It was good to see everyone in my training group again, and less exciting to sit in sessions all day. But after two weeks of boredom punctuated by two intense games of sock assassins, about half of us rewarded ourselves by taking off to Kribi.

Kribi is a beach/port town in the South region of Cameroon, known for having a freshwater waterfall that falls directly into the ocean and also the best seafood in Cameroon. I am going to go ahead and say that from what I have experienced, it also has the best pizza (though unfortunately the night I went they were out of seafood pizza).

Now my favorite Cameroonian dish by far is definitely poisson braisé (which, from what I can find on the Internet, is called “burning fish” in Anglophone Cameroon). It is basically just a whole fish cleaned, scaled, and brushed with a spice mixture before being grilled over hot coals and served with more spice mixture, piment sauce, and sometimes mayonnaise and/or baton de manioc on the side. Yes, the head is still attached, and plenty of Cameroonians will tell you that the head is the best part. Poisson braisé is not available at my post, where fish that isn’t smoked or dried is rarely ever seen. In cities with bar neighborhoods, however, it is typical to see fish mamas set up along the street waiting for you to pick out one of their fish for them to grill up and bring to your table in whatever bar you’ve decided to sit in and order a beer or soft drink.

My first poisson braisé experience in Kribi was like this, making it similar to several nights in Garoua, except that the fish mama had a much wider selection of fish (barracuda, anyone?), all of which had probably still been swimming that morning. And then we found the fish market. This is where you can find fishermen emptying nets full of fresh fish onto cement slabs ready to sell to the crowds, as well as a whole bunch of fish mamas set up with their own tables looking out on the marina, ready to gill some fresh fish. You can choose from the fish the mama already has on hand or go haggle with a fisherman yourself and then just pay a fish mama to cook it for you. A glass of fresh pineapple juice makes the meal complete. I went back the next day, too.

Unfortunately, my last night in Kribi I got sick, and I don’t mean that I had a bit of a cold. I mean standing in the bathroom and trying to decide if the next round would be vomiting or diarrhea sick. 3 month in an out of the way village, and of course the first time I come down with anything more than the sniffles would be in one of the most touristy towns in Cameroon. But hey, I was recovered enough to travel the next morning, and a course of cipro and a lot of white bread and clean water later, I am back at post and eating street food again.

There are some pictures up on Flickr, both of Kribi and my post, including the Youth Day festivities that went on the week before I went to in-service.

This looks like it could be California, but it is Cameroon, really.

Also, if any of you have been following news of Africa, you should know that I am safe, the kidnappings happened in the Far North and not anywhere near my post, and the Peace Corps is keeping on top of things and being fairly conservative about the safety of volunteers. So in short, there is no need to worry about me, because there are plenty of people in Yaoundé doing it for you!