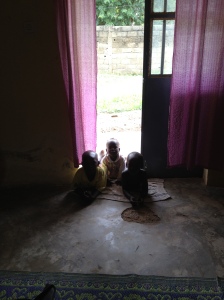 Some of my neighbor children hanging out in my doorway

When I first got to my post I had a lot of people who came by my house asking me if I lived there all by myself. At first I was reluctant to answer that yes, one would be able to find me in my house alone and asleep at night, but after a while I started to realize why people found my situation so curious.

You see, one of my teenage neighbors also comes to visit me pretty often, sometimes just to say hi, or sometimes to hang out and chat, play cards, or read. Her questioning about my living situation has gotten a bit more direct: don’t you get lonely always in your house by yourself? I always reply by assuring her that no, I do not mind spending time alone, that I am used to it.

The thing is that in Cameroon very few people actually live alone. The few people I know who are unmarried and living away from their parents are men who are in my town for work, since government workers can be “affected” to anywhere in the country and are just expected to go where they are told. As far as I can tell, these men rent rooms in other families’ houses or compounds. In some cases I know men who live and work at my post, while their wives and families are in a city like Garoua or Yaoundé. They often sleep in their offices. I do not know of any other one person in town who lives in a house by themselves.

Add in the facts that that the families are so much bigger and the houses are so much smaller here, and you can see how the idea of alone time might seem a little strange. The affected government workers who rent rooms actually probably get a lot more of it than the average Cameroonian, what with having a whole room, however small, entirely to themselves.

If I am being completely honest, though, I do sometimes get lonely at post. It’s not an overabundance of alone time that bothers me, though. After all, I do have a lot of very friendly neighbors and other friends to visit and be visited by, and it is true that as an American (and self-confessed introvert) I am used to some time alone. What I don’t have is people that speak my language – or at least not at a level that makes conversation flow easily. What I don’t have is people who immediately get my cultural references, and I theirs. I don’t have people who understand what my life was like in the US and the infinite small ways it is different here.

I am not writing about any sort of crushing loneliness with no respite. In fact, when I do have alone time, and especially electricity and cell service, I can immerse myself in my own culture through TV shows on my laptop, phone calls, and sometimes even Internet. I see other American volunteers every couple of weeks on trips to cities. I am told that the Peace Corps might even be sending me a post mate in a couple of months.

The loneliness is very manageable, but it is there.